THIS BABY COOKIE CLAIMS TO REDUCE PEANUT ALLERGY RISK BY 80%

More companies are trying to make peanut allergies a thing of the past. And since rates have tripled since the 90s to affect 1.4 percent of Americans, that’s a pretty big undertaking. On the heels of one prevention kit earning the FDA’s stamp of approval, another peanut allergy prevention tool is making headlines. Yes, it’s for babies, but you may want to try this one too.

The Peanut Mani, the newest product from Bambino’s Frozen Baby Food, is the first peanut allergy prevention cookie for babies 4 months and up. Bambino founder and CEO Zoi Maroudas says feeding your child one cookie per day for 18 months can reduce the likelihood of developing a peanut allergy by 80 percent. And this month, allergists presented it to the American Allergy Foundation Conference as being effective for high risk infants. 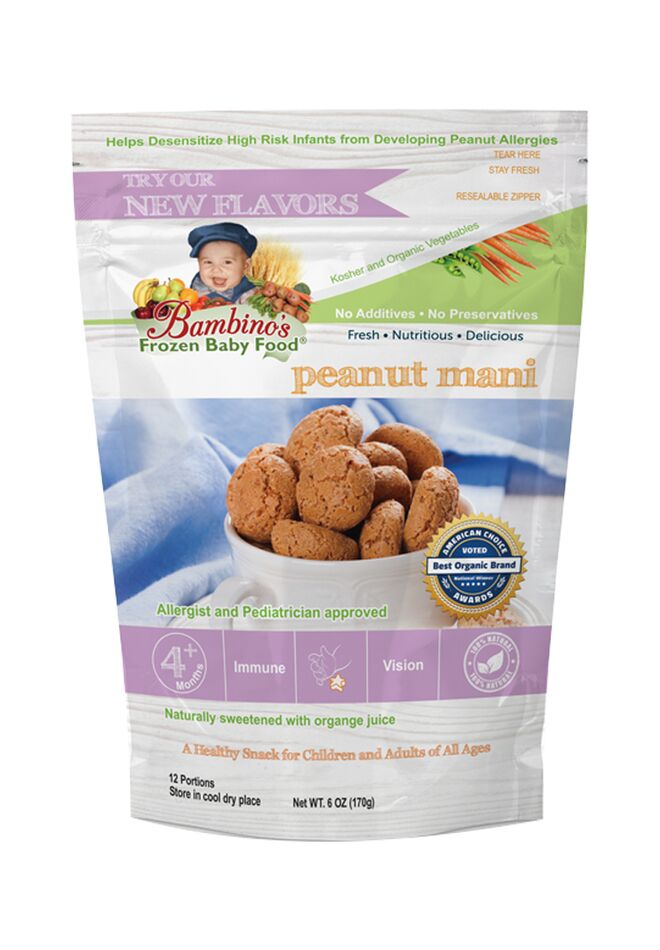 Hold up. Wondering how you can safely feed your baby a cookie? From 4 to 8 months, parents are instructed to crush the cookie and mix it into breast milk or formula. But once baby can sit upright, grasp and chew, this is a great healthy and organic snack. As noted on the packaging, it’s great for adults too.

Bambino developed the Peanut Mani cookie shortly after the National Institute of Allergy and Infectious Diseases (NIAID) published its 2015/2016 LEAP study, a clinical trial that suggested an 80 percent prevention effect when peanut products were consumed regularly from ages 0 through 5. As a result, peanut guidelines for babies were updated, encouraging parents to introduce the nut between 4 and 6 months old, and in some cases, even earlier. As Maroudas write on Medium, the Peanut Mani may have been a little ahead of its time.

“In 2015 and 2016, I presented the Peanut Mani to the American Allergy Foundation Conference. It was a tough crowd,” she says. “About half of the physicians and allergists in room had still not reversed course on their thinking about introducing peanut protein to prevent peanut allergy. The other half — well, many of them now stock the Peanut Mani in their office.”

“We will never prevent peanut allergies in all children. But cutting the risk by 80 percent is an amazing advancement,” Maroudas says. “I am thrilled to be part of the movement that can — and will — save lives.”